We were latecomers, but hardcore Breaking Bad fans. So it wouldn’t be right to ride through Albuquerque without visiting a few of the film locations from the show. I drew up a loop that covered seven of the sites in about an hour. But first, we had to get some coffee…

Although Walter White blew up the building housing Tuco’s headquarters in the show, the building has mysteriously survived, and is the home of Java Joe’s, which not only serves some great coffee but some delicious breakfasts.

While sitting in front having coffee, the MethLab Bounder motorhome drove by.

After all these years, people are still doing tours in a Bounder motorhome just like Walt & Jesse’s.

A few blocks down the street from Tuco’s is Jesse Pinkman’s aunt’s house, where he lived and hosted parties:

There is a two car garage where the Bounder motorhome sat in Jesse’s driveway, but otherwise the house looks the same (although much cleaner and greener now that meth-heads aren’t living in it).

Around the corner from Jesse’s is the Dog House, which made several appearances in the show, particularly in the opening.

Then it was a few miles south to Los Pollos Hermanos.

The place still looks the same, although the actual name is back on the building. You can even sit in Walt’s booth.

Then it was a run up north to the Laundry Facility

It’s actually a commercial laundry facility. But I’m pretty sure there’s no meth lab in the basement.

And last but certainly not least is the White residence.

I’m sure the production company didn’t pay these people enough to use their home, and the owners had no idea that years later 400 people a month would still be taking photos in front of their house. They had to put up a fence and several “No Trespassing” signs to keep people out. And they put a metal roof on the place…probably so the pizzas would slide off the garage roof easier.

After a morning of roaming Albuquerque, and laughing at ourselves and all the others that we kept bumping into taking photos of these landmarks, we headed north towards Colorado. At one point on the highway, we saw a wildlife crossing that made us turn around and go back.

Apparently this location is so frequently used by wildlife that there is a crosswalk painted across the road, and lights flash when the animals are crossing. I thought to myself, “They must have cameras that sense when there is wildlife crossing, and the lights flash”. But no, it’s a much more simple system: 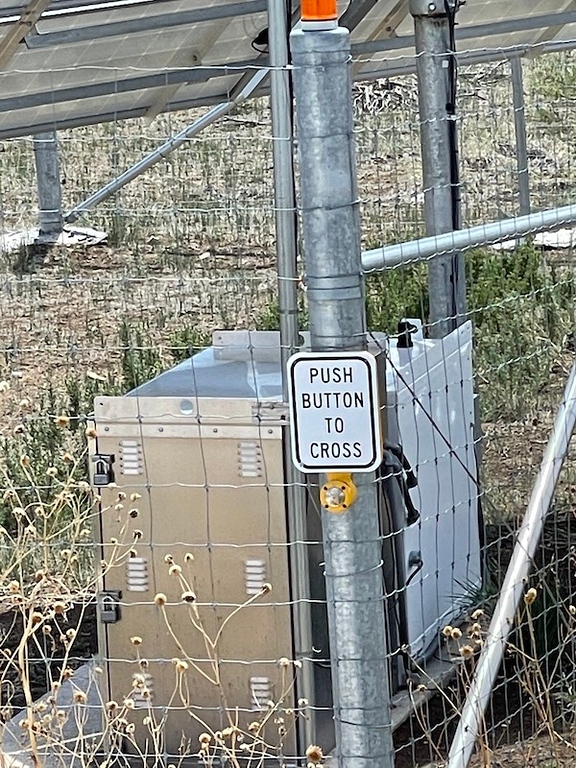 They actually have “Push to cross” buttons on each end of the crosswalk. There are some smart wildlife in this part of the country!

We had planned to wild camp near Mancos, Colorado, but stumbled on a nice campground that had a few remaining spots just a few miles before our destination.