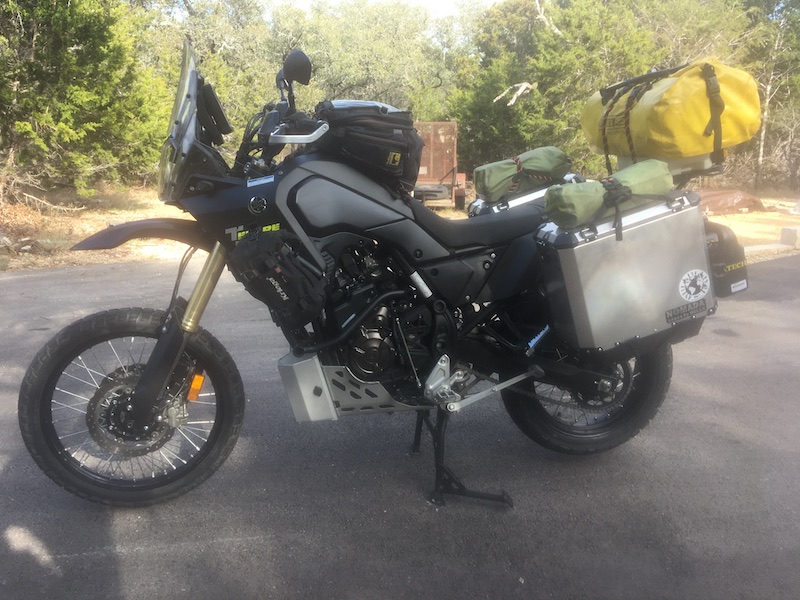 It’s kind of amazing how much you can pack on a motorcycle if you have the time to study it and find nooks and crannies to stuff things. On the other hand, I’m fairly meticulous about analyzing what we take along and looking for ways to shrink it, adapt it, or lose it. I spent a lot of time studying other travelers’ gear before leaving on my first trip, and because of that, I didn’t take a lot of unnecessary stuff that I had to ship home (yes, this is a thing).

Much of the gear that I used on my 2015-2016 trip will be used again beginning in 2021, because as they say, “if it ain’t broke, don’t fix it”. When you live for a year off of a small motorcycle, you learn what works and what doesn’t, what you need and what you don’t, and what not to carry next time.

In 2015, I packed a lot more spare parts than I actually needed or used. This was primarily due to the fact that I was taking a small, low-horsepower motorcycle on a long trip and focusing on off-road riding for much of it. So I took gaskets, clutch plates, levers (including a brake pedal), cables (everybody does?), brake pads, and lots more.

What I learned was that many of these parts are available in places you might not expect. Yes, I had planned ahead from the beginning, and chose a motorcycle that, although the exact model was not sold in many of the countries I visited, the engine and many of the parts were common to other models that are sold in those countries. This is definitely something to keep in mind when in the early stages of planning. For example, when I needed sprockets and a chain in Argentina, I found that shops in Buenos Aires had sprockets for a YBR250 (a street bike version sold there). Same sprockets. Of course, at the time, I wasn’t aware of that. Now I know.

On the last trip, I was on a much smaller motorcycle, but I went solo, so I only had to pack for one. Adding a passenger and all of her gear drastically increases the load. A lot of thought has to go into this, as the load needs to be balanced as well as possible. We have a lot more on the rear of the motorcycle than I would prefer, but I’ve been able to spread some weight forward by installing my heavy tool pouch to the front of the skid plate similar to last time, and I’ve added the side pouches to carry heavy spare inner tubes, and other supplies.

Do we absolutely need all of this stuff all of the time? No. Some people ship certain parts of their kit between locations during their travels. For example, if you know you won’t be camping in certain countries, it might make sense to ship the camping gear ahead, or home, if you’ve finished that part of your trip.

For the first year or so of this upcoming trip, we will be in developed countries. This changes some of the gear we will carry. Also, there will be some side-trips into other countries on other motorcycles that will be totally different, and for those trips it’s likely that all of the gear we carry will be in a small backpack. More about that when it comes.

For now, here’s a complete list of all gear (subject to change), including the bike, all modifications, and everything we will carry on it and on us. If you want to plan a similar trip, you may find this useful as a starting point to decide what you carry. When you look at the whole list, it seems like “everything but the kitchen sink”, but many people will want to add a lot more. We’ve been there, done that, and found we don’t need it. Others will feel we are carrying a lot of unnecessary stuff. As I’ve said, to each his/her own. Everyone has different priorities. It’s important to have an item or two that makes you happy, even if it seems like excess. Even if you’re not planning a similar trip, it’s amusing (to me, anyway) to scroll down the list and marvel at how much crap is on one motorcycle.

7 thoughts on ““What Are You Taking and How Do You Pack It?””