This morning I’m determined to ride to Zapatoca from Barichara. On Google Maps and Maps.Me I can see the road, even though both of those and my Garmin GPS tell me the only way there is back through Bucaramanga on the highway. I know better, and I will find the road.

After breakfast in town, I walk to the edge of town and find the road heading out towards the valley and Galan. This is my first leg. 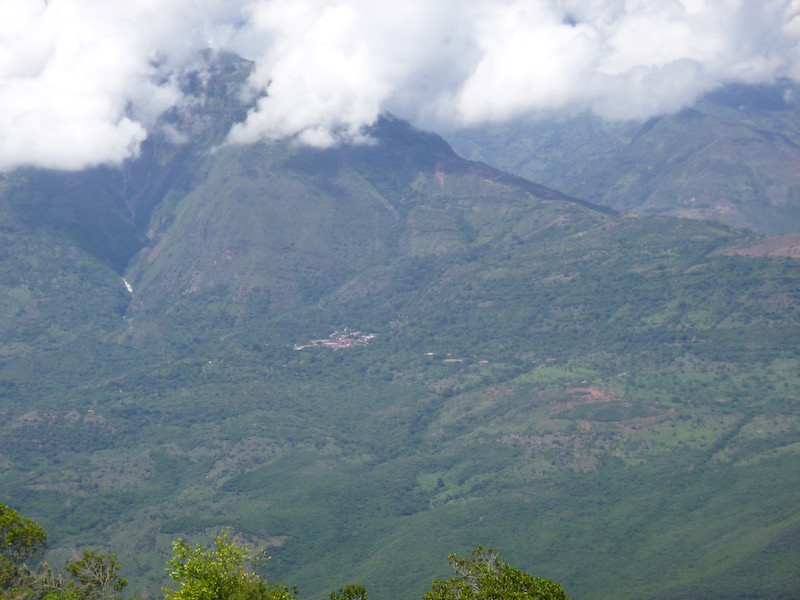 Looking across the valley from Barichara to the small town of Galan. My first waypoint on the way to Zapatoca.

I return to the hostel, suit up and ride out of town. About 10 kilometers down a beautiful small paved road I am in Guane, just as church is letting out. It’s a very quaint tiny village, but it’s once again at the end of the road. 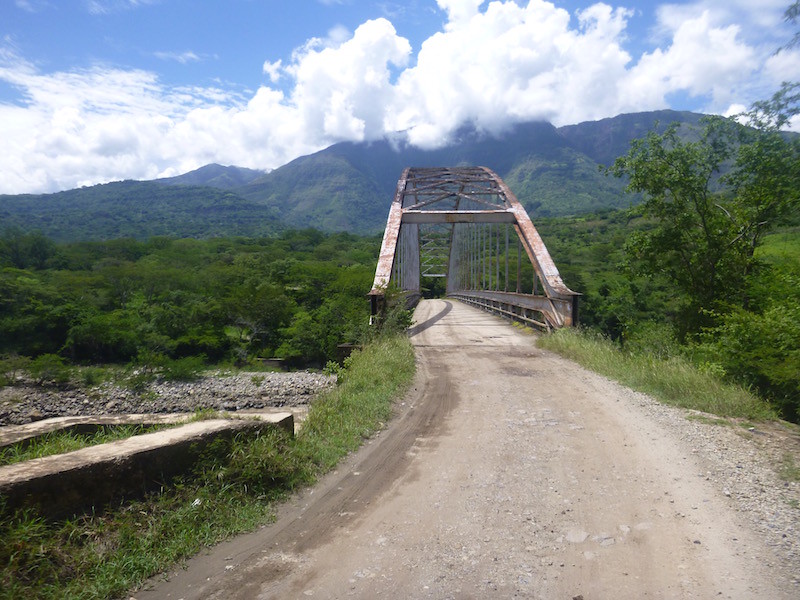 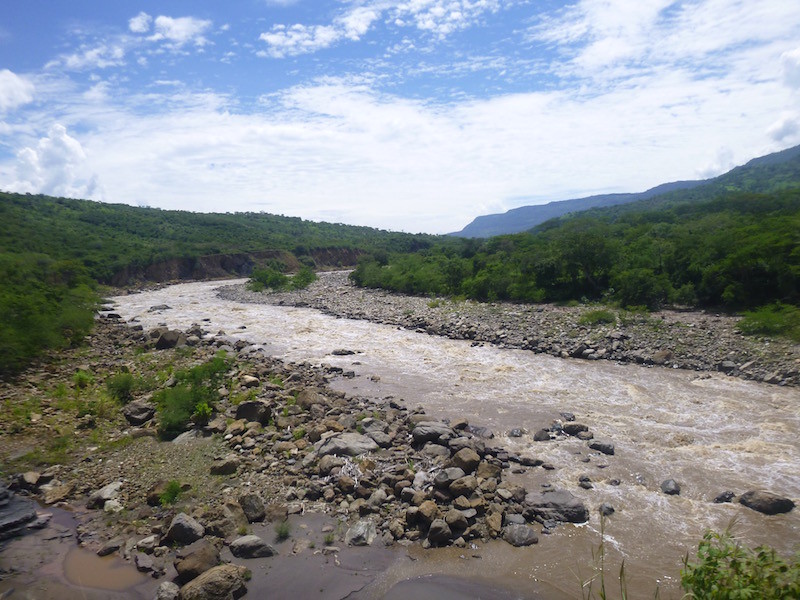 The bridge could use a little maintenance. There are several of these holes that you can look through all the way to the river below.

The dirt road is a bit rough in places, but overall it’s a great ride. The views of the canyon are huge. I pass through Galan and La Fuente, each about eight blocks square (standard Colonial layout) with the entrance in the southeast corner and the exit in the northwest corner, forcing me to ride through town, typically around the town square in the center of the village.

Climbing up to Zapatoca, the road runs along the edge of the valley for a good distance. 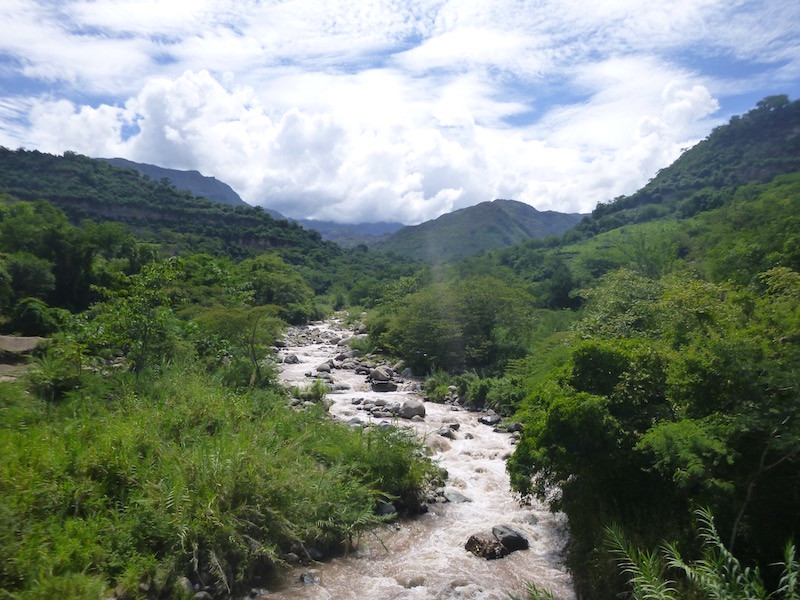 “Welcome to Zapatoca. Climate of silk, haven of peace.”

After La Fuente, it’s about another 20 kilometers to Zapatoca, where I stop for lunch and refuel before heading back. I am relieved that I was finally able to find this road, and glad that I didn’t miss it. The scenery is worth every minute and every rock on the road. This would be a perfect off-road excursion for a BMW or my Super Tenere, and I wouldn’t hesitate to do this route two-up on a big bike, as long as it isn’t raining. There are definitely places on the road that would be extremely slick if it was raining. That said, it rained last night in Barichara, and the road was in good shape this morning. 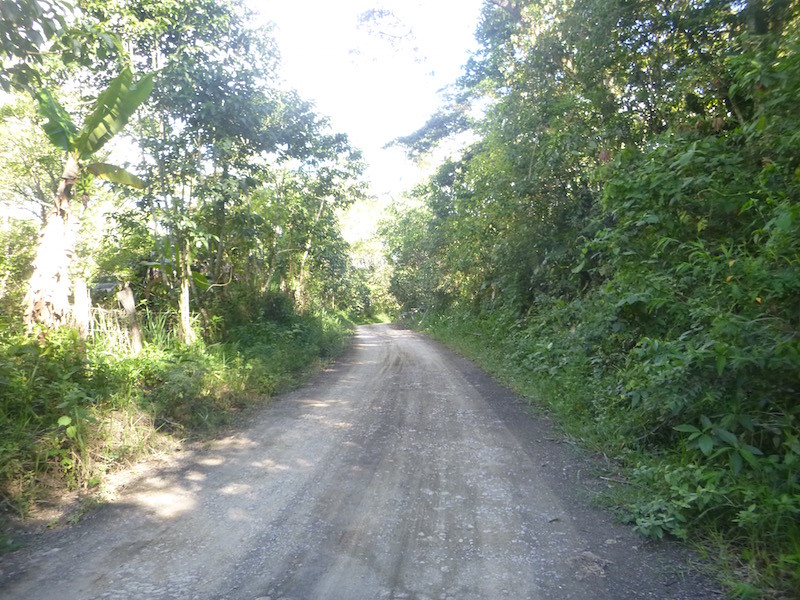 Heading back, as I round a corner in the middle of nowhere there is a guy standing next to his motorcycle, and two national police officers on another bike next to him. He looks like he’s having bike problems, so I turn around to ask if I can help. The second officer positions his large rifle as if I’m a threat. In my mind, I’m thinking “Come on, I’m clearly a foreign tourist. Nobody here wears this alien stuff.”

When I ask if he needs help, he points to the piece of inner tube sticking out of his rear tire. I quickly determine that he has ridden with the rear tire flat long enough that it has torn the valve stem from the tube. I pull out my tools and begin to remove his rear wheel. The police decide that I have things under control and they leave.

Two more guys ride up on a scooter. They are clearly friends of the guy with the flat tire. With the wheel off the bike, I use my tire irons to remove the tire and tube, and pull a new tube from my pannier. At this point the three of them are looking at me like I just landed here from Mars, and I can understand. When was the last time one of them had a flat, and some guy from the U.S. rolled up, produced the correct size inner tube, and installed it while they watched? Likely never.

New tube installed, I use my air compressor to inflate the tire and reinstall the wheel. Good to go in about 20 minutes. During this time, the poor guy has tried to help a few times, but mostly they’ve been discussing how much this is going to cost him. So when he asks and all I say is “Buen viaje” (good travels), he is a bit stunned. 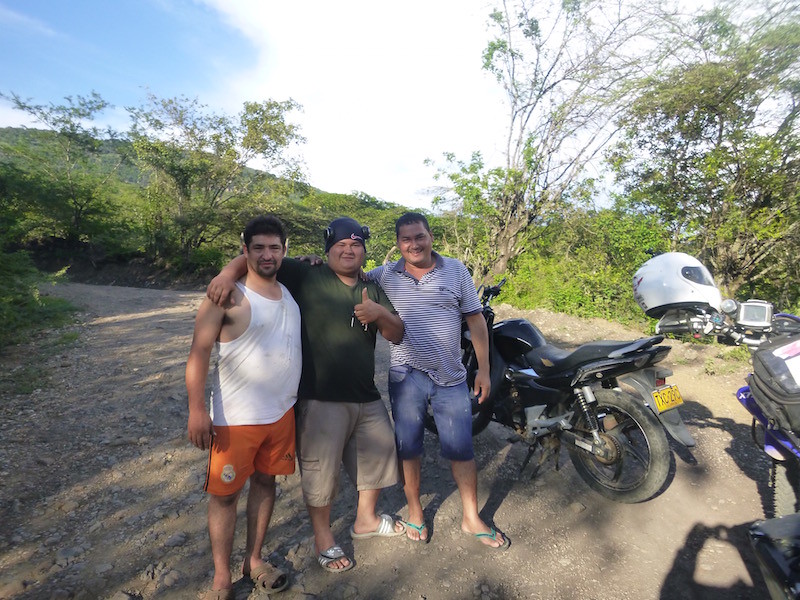 I figure karma is a good thing, and I can’t help but think about the story he will tell at the bar for the next week or so about this American guy that just showed up out of the blue and fixed his flat for free. Colombia and its’ people have been good to me. A little payback was in order.

9 thoughts on “Zapatoca: Lost, and Found”