Before I could allow myself to do any serious sight-seeing in this city, I needed to get to work: I had a list of items to be done on the bike before taking it to the airport for it’s first flight.

First things first: get all the mud, dirt, and grime off so I can work on it. It’s nice to have car washes that will actually wash bikes too. These guys did a great job: they used degreaser, soap, and not too much pressure. Cost: about $7.

The Butterfly Effect: lots of white butterflies on Ruta 3 heading north. Many of them were kamikazes, turning my helmet into a sticky mess. 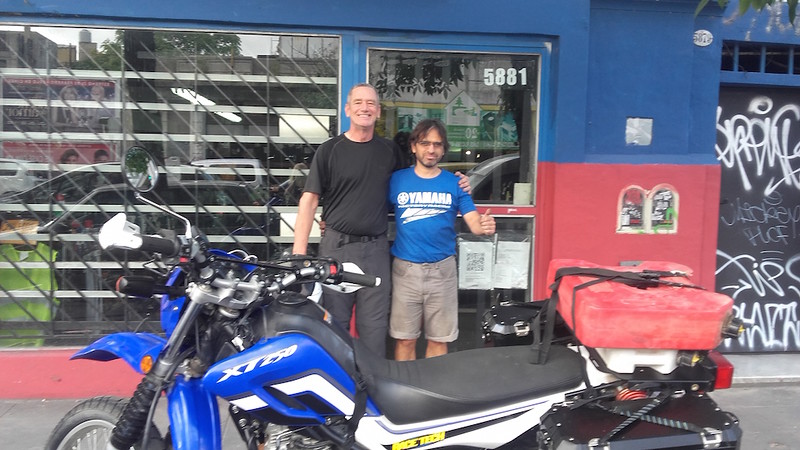 Meet Paolo. This guy is awesome. He runs Moto Avenida, a little one-man independent parts, accessory and service shop just around the corner from my apartment on Avenida Cordoba in Buenos Aires. I stopped in and asked him if he would let me use his shop to change my oil & filter and chain & sprockets. He gladly allowed me to use his space. I bought a few small items and my oil from him. As usual, not a word of English, but incredibly nice and helpful. I had to remove the swingarm to install the endless chain, but everything I did took about an hour and a half at his shop. Just coincidence that he was wearing a Yamaha t-shirt when I showed up.

One of these things is not like the other: old fuel filter/pump on the left. Filter is just a wee bit black compared to the new one. I’ll clean it again and keep it as a spare just in case.

I also replaced the mirror that was broken when the bike was dropped off the worklift in Punta Arenas. I removed my GPS, its’ mounting dock and associated wiring for shipping, and installed a new air filter.

At this point, the bike is ready to ship. I’ll cover those details Tuesday when it goes to the shipper.

2 thoughts on “Buenos Aires, Part One: The Bike”