I was definitely right about a day making a difference. Although I thoroughly enjoyed my most recent week in Argentina, there is a very definite “green line” along the border between Argentina and Chile down here.

As I left Las Lajas, Argentina and headed up the mountain to cross into Chile, the scenery began to change from desert brush to piñon trees.

Sitting in line at the Argentina border exit. Piñon trees begin to appear about here.

The closer I got to the border, the less power the bike seemed to be making. It definitely felt like it was running very lean, and perhaps had a fuel issue. I was convinced pretty quickly that the issue was in the fuel I purchased not far before arriving in Las Lajas the night before.

After crossing into Chile I decided I needed to stop and find the problem before it became a major problem. While I couldn’t hear any detonation, I was concerned that the bike was running so lean that it could be causing some internal damage. I found a shade tree and pulled off under it to investigate.

A little roadside downtime to fix my running problem.

After removing the fuel tank and turning it over, I took the fuel pump out and cleaned it, dried it and reinstalled it in the tank. I was thankful that the pump itself looked to be in good shape, with very little debris present, and the inside of the tank was clean. Most of the water (and it wasn’t much but it doesn’t take much) had settled to the lowest spot, which was the fuel line between the pump and the throttle body. I drained the line and dried it as best I could, reassembled everything, and fired it up. Problem fixed. For now, at least.

As I was putting everything back together, a guy pulled up on a BMW F800GS. He was from the UK, and had rented the BMW in Pucon, Chile (my destination for the night). This was his second day on it, and he had a flat rear tire. He was complaining about the cracks in the sidewalls, and believed they were the cause of his flat. I disagreed, but didn’t voice my opinion; the cracks were a result of him riding the tire flat for a lot of miles . I was feeling better about my situation. At least I could continue. He was headed to a campground about a mile away, and was planning to wait for a tire to arrive by bus within a day or two.

I continued on to Pucon with no further issues. Going through Villarrica I was surprised by the sheer numbers of tourists on a Tuesday. I have to remind myself that it is summer here. Just because it is Tuesday doesn’t mean families aren’t vacationing during the summer. The “beach” area along the lakeside was packed with people. Traffic was backed up for miles. It’s a beautiful tourism destination with a major tourism traffic issue. Cars line the road along the edge of the lake for miles between Villarrica and Pucon. 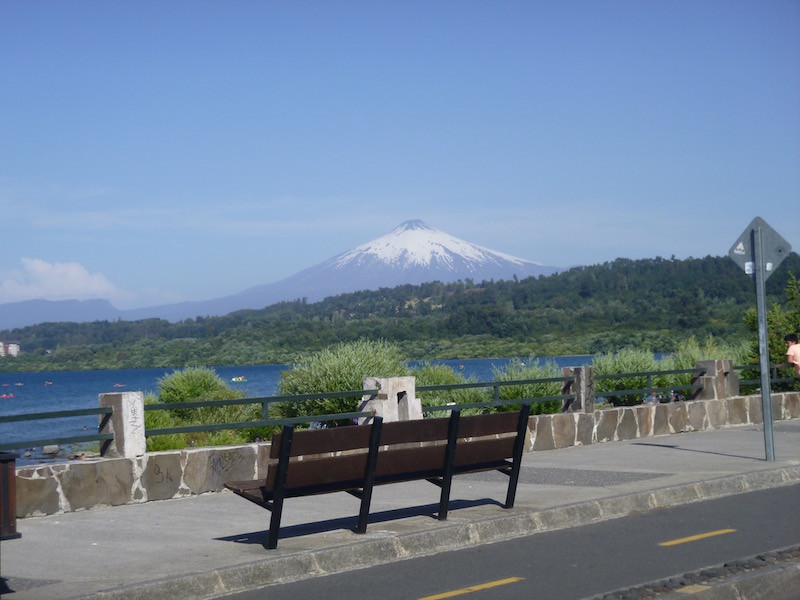 View of Villarrica Volcano, looking across Lago Villarrica, from the town of Villarrica. This is one of Chile’s most active volcanoes, with the last eruption on March 3, 2015.

My destination for the evening: Cris Maragaño’s place. More about Cris and his project in the next post.