Buenos Aires, Argentina to Cape Town, South Africa. Direct, it’s a bit over four thousand miles. Not bad. That would be about eight hours on a plane. If there was a plane from Buenos Aires to Cape Town. But there isn’t. For me, or for the bike. South African Airways used to fly between these two cities, but no longer does. Which means that instead of eight hours to cover 4,300 miles, it now takes 37 hours and just over 13,000 miles to travel between South America and South Africa.

I left Buenos Aires at 9:30pm on Thursday night. Eighteen hours later (and seven hours of time zone changes), I landed in Dubai, UAE, at 10:30pm Friday night. I’ve traveled to Japan many times from the United States, but this was the first time I had been served dinner, breakfast, lunch, and dinner again on a flight.

I had a nine and a half hour layover in Dubai, and the airline provided me with a free hotel room near the airport to get some proper sleep before continuing on in the morning. I was a bit disappointed to be there only at night, and not get to experience this incredible city in the daylight. But I was also exhausted from being on a plane for so long, and was ready for a bed.

The hotel apparently functions solely as a stopover for Emirates Airlines. When I checked in, they already knew my schedule, and had already set up a 5am wake-up call, and informed me that check-out was at 6am (how’s that for efficiency?). By 6:30am I was back at the airport and about to board my nine hour flight to Cape Town.

By the time I arrived in Cape Town Saturday afternoon, I had been served six meals and watched ten movies, including:

You’ve probably never heard of more than half of these movies. I hadn’t either. But I have to say, they were all good. Some were good for helping me catch up on my sleep. Others, like Barney Thompson, were just plain strange.

As of this writing, the bike hasn’t left Buenos Aires yet. It will fly to London, then change planes and head to Cape Town, and should arrive here Tuesday afternoon. Meanwhile, I’m on foot (well, foot and a half, actually; my ankle swelled up tremendously from all of the plane time, but I’m still walking fairly well), so I plan to do some walking today, and head to the shopping area to acquire some things that I couldn’t fly with, such as gas canisters for my camp stove. 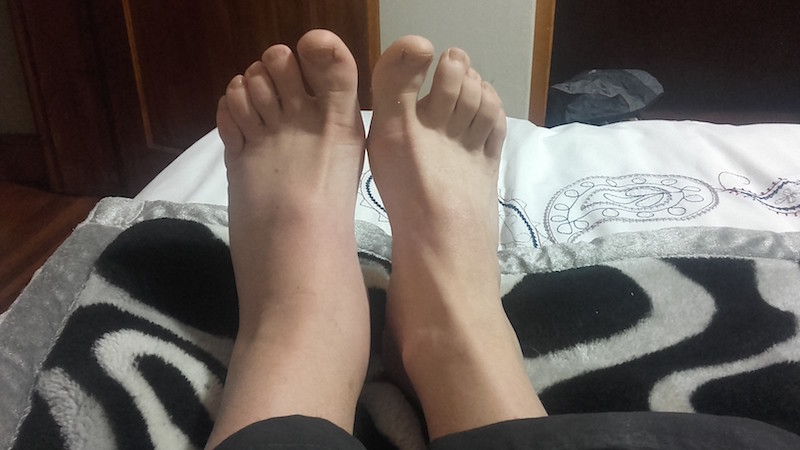 27 hours in economy coach seating is not good for the ankle.

The area I’m staying in reminds me a lot of Southern California, and in particular Orange County. The neighborhood, the weather, and the landscape looks and feels a lot like it.

Since I’m restricted to short distances for a few more days, I probably won’t post much until the bike arrives, unless something interesting happens between now and then. Otherwise, I plan to catch up on my reading and rest until then.